All Collections
Your contents cover
Contents vs gadget only cover

Contents vs gadget only cover

Are you looking to cover a specific item only and don't need need cover for 'Things in your home'? This article may help...

Written by Darius Kumana
Updated over a week ago

Today, with most insurance companies, you have the choice of contents policies and gadget policies.

You can get cheap, blanket cover for your contents, but it’s often only in the fine print where you find out exactly what’s covered and what isn’t (and let’s be honest – few of us read the fine print).

What about the expensive gadgets and gizmos you carry around all the time? Most likely, these items may not be covered for accidental damage or loss outside your home under a general contents policy. Or, if they are, some policies may come with higher excesses and more restrictions when insured along with the rest of your stuff.

Meanwhile, gadget insurance lets you list your gizmos, but you can pay dearly for having a separate policy to protect them outside the home and for accidental damage and loss.

So you might think you just want gadget cover, but… turns out having more of your stuff covered could actually make your insurance cheaper. 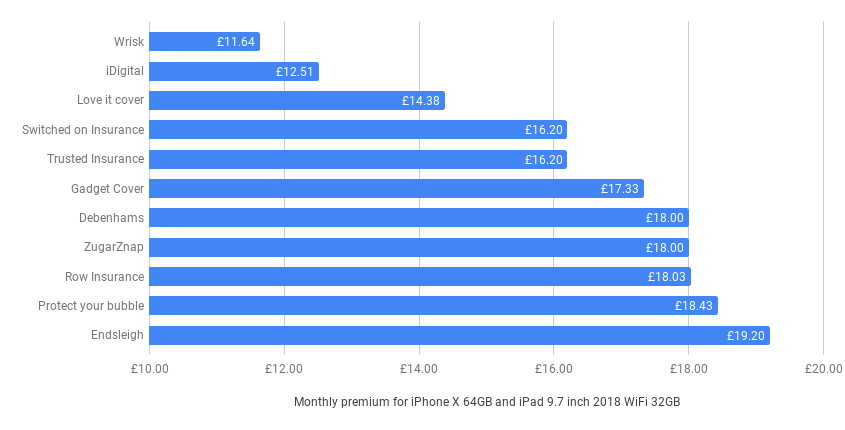 We carried out a quick comparison to get cover for an iPhone X 64GB and an iPad 9.7" WiFI 2018 32GB. Our results are based on a Wrisk Score of 436 from a 26 year old male living in central London with £3,000 of general contents. Quotes were collated in October 2018 and include cover loss, theft and accidental damage.

Our comparison found insuring your stuff with Wrisk is up to 50% cheaper than an average gadget-only policy (Wrisk also include £3,000 of cover for 'Things in your home').

Yup – hard to believe but this is how it is today. Insurance companies have looked at who has made claims in the past and concluded that those who only insure their gadgets are actually “greater risks” than those who insure them as part of a wider cover for all their stuff… So, in essence, they’re charging more for less cover.

It’s a dark art behind the scenes, and the way in which companies decide how trustworthy you are is a process often riddled with outdated social biases hidden within mathematics.

At Wrisk we think we can do better

As a young company, we don’t yet have enough evidence to change the current industry norm. This means – in these early stages – that historic industry data (the old way of doing things) tends to carry more weight with our insurer partners than our own smaller data-set on the habits and behaviours of our users.

But our direction of travel is clear, and we’re busy gathering the evidence we need to champion these changes. While we can’t change things overnight, we wanted to share this plan with you. Because our commitment to transparency means that if we can’t credibly explain it, we won’t do it.

So if you felt you only wanted gadget cover...
Wrisk’s approach is the best of both worlds. We let you name individual items and specify the level of cover you need for them both inside and outside your home. And by also including cover for 'Things in your home' – furniture, clothes, shoes, soft furnishings and small electrical appliances in your home – we can keep the price low too.

Before you leave
Whilst we have compared Wrisk to other gadget-only policies, you may find comparable or cheaper policies when looking at other contents providers where you can add your gadgets. Obviously with Wrisk, we have tried to make it as easy as possible for you add an maintain an inventory of your gadgets alongside cover for things in your home. We'd love to know what you think...

Did this answer your question?